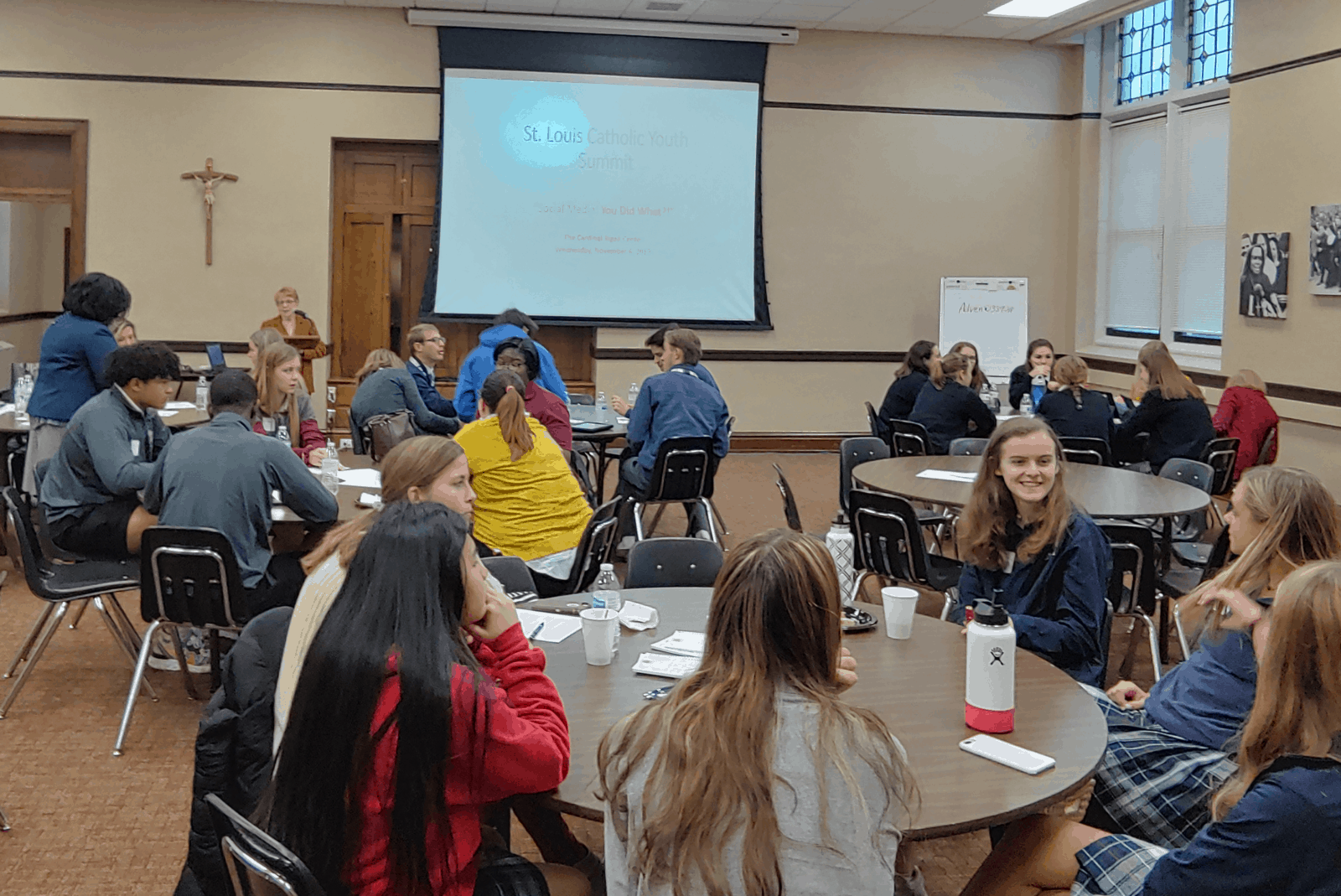 Here’s the problem with bullying. When we hear a kid yelling somebody and calling somebody a name repeatedly, we can document that. When we see somebody physically fighting in a hallway or on a bus or on school grounds, we can see that happen.
The part that we don’t see happen is the rumors behind the back and the isolating. We as humans are smart – we know we don’t want to get caught. So, we do it underneath everything. We start the [chat] room or we text about him or her and then it goes around and it goes around and it goes around.
Know that when you think it’s just a joke, it’s not just a joke. These are people’s lives.  – Tina Meier

On November 6, over 50 high school leaders and teachers attended Incarnate Word Foundation’s first St. Louis Catholic Youth Summit. The summit’s theme – Social Media: You Did What?! – resonated with the attendees’ personal experiences. Tina Meier shared her own in losing her daughter, Megan, to an online “catfishing” hoax. Catfishing means to lure (someone) into a relationship by means of a fictional online persona. In Megan’s case, the outcome was tragic.

In the years since her daughter’s death by suicide, Tina launched the Megan Meier Foundation. The foundation works tirelessly to help teens, families, and schools targeted by cyberbullying.

We need support and there is help out there. Suicide is preventable. Today, Megan should be turning 27 years old. She should be having a family or living her life, making this world better, but she died just at 13 years old. I want to make sure that you guys are the ones that are out there that if you are struggling that you’re here in 10 years, 20 years, 30 years, 40 years because you’re the ones that are going to make this world change. You’re the ones that are going to make mental health not be a stigma, suicide….making sure that we have the cures and the supports in place. – Tina Meier

For Amy Hunter, the summit’s next presenter, cyberbullying is also a deeply personal concern. She’s raising her sons and daughter in our culture of racism, which escalates in heated exchanges online. For Amy, she’s chosen to engage in these sometimes-bruising conversations, because we can’t be silent in the face of discrimination. Her approach:

Why do people do racist things on social media? Because you can be a superstar. Yeah, you get so popular! We all know who you are now. I want us to remember a couple of things: We are born good, so these aren’t bad people, even if it’s us who’s doing them, but we get socialized in a particular way to either think that we need this kind of thing this way, or that we don’t have enough deep relationships with people who are different than us to know that that might be hurtful or harmful. Anger, despair and hate are sometimes what’s driving racism on social media.

What if we could respond differently, from an understanding that that person is hurting and that’s why they said that. Our response can be much more loving: “You are such a good person. Help me understand why you would post such a thing?” and then just wait. This is technique I call calling people in versus calling them out. Whatever their response is, at least you start with a real answer instead of one that says you’ve made up in your mind. People are going to make mistakes around racism because we don’t have enough conversations about it because we’re too afraid to talk about it. – Amy Hunter

Amy called on the students’ inner artists to imagine something different for themselves, and the world:

Young people are like, “Let’s change the world forever. Let’s actually create something that you’d like to see.” In order to do that, put on your artist’s lens. We are born artists, y’all, whether it’s singing, storytelling, visual arts, performing arts, whatever. Just know if you have not yet found your inner artists, it’s in there. I want you to channel that inner artist because what is clear is if the old people could have figured it out, they would have. And we need you to work with them to make it. The beauty of artists is that they create things that we have not yet seen or heard.

We are here to walk in the sun, not live in the shadows. That is my expectation and wish for every single person here.

Following their presentations, Tina and Amy led breakout sessions to discuss practical tactics for dealing with cyberbullying and racism.

The St. Louis Catholic Youth Summit was hosted as part of the Incarnate Word Foundation’s celebration of the 150th Anniversary of the founding of the CCVI’s ministry in the United States. The event host, Sr. Helena Montana, CCVI, reported on her experience at the National Youth Summit, held in Jackson, Mississippi. Her report:

The National Youth Summit is the brainchild of Christi Griffin, Founder and CEO of The Ethics Project of St. Louis. Christi describes the Summit as an opportunity to “bring together high school student leaders from across the United States to work with leading educators, justice professionals, and economists.” The gathering aims to honor the civil rights legends who have devoted their lives to moving the US racial equity agenda forward.
This year’s meeting keynoted Former US Ambassador Andrew Young who emphasized the value of a non-violent approach to the challenges facing our culture today, particularly in the area of race relations. Dr. Young reminded the young participants that the “US Constitution provides for the pursuit of happiness.” Happiness itself must be earned through hard work. Although the races in the US “are born into an unjust relationship,” it is up to today’s emerging leaders to make those relationships just and right. He repeatedly stressed: “When you lose your temper, you lose your mind!”
Other notable presentations featured Ken Morris, Jr., direct descendent of Frederick Douglass, Lynne M. Jackson, direct descendent of Dred Scott, and Dr. Terrance Roberts, one of the surviving Little Rock Nine. All shared richly from their lived experiences and encouraged the Summit participants to develop their leadership potential.
Experiencing life in the Deep South proved an integral part of the learning experience. The first day of the Summit featured presentations at Jackson State University, an historically Black university rich in history. On May 14, 1970, two students were shot by police during an on-campus protest at the school. An additional 12 students were injured during the shooting. A dormitory still bears the bullet marks fired on campus that day. Subsequent Summit events offered opportunities to visit the amazing exhibits at the Mississippi Museum of Art, the Mississippi Civil Right Museum, and the Mississippi History Museum.

Each of the schools participating in the St. Louis Catholic Youth Summit will create a plan to carry what they learned at the summit to their own schools. Sr. Helena will work with school leadership to track progress and impacts.

The St. Louis Catholic Youth Summit ended with a performance by the St. Louis Story Stitchers.